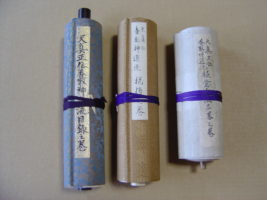 Joining the tradition begins with signing a blood oath (“the Respectful Oath to the Supreme Deities”). The paper this oath is signed on contains the pledges that one must uphold as a member of the tradition.

Practice then begins with instruction in the form and orally transmitted teachings regarding suburi (fundamental movement with the sword). There are multiple factors to consider over a number of stages, so students receive instruction and training based on their state of advancement.

Practice focuses on the practice of kata (prearranged combative forms) exemplified by the following:

Our curriculum includes a large number of other skills as well, with a large number of orally transmitted instructions for each, as well as strategic and esoteric study, making study a lifetime endeavor. Members also participate in and learn ritual and practices associated with our headmaster’s traditional ceremonies (keiko hajime (the start of practice for the year) and jinkosai (annual festival at Katori Shrine). We also engage in promotional activities such as demonstrations hosted by the Nihon Kobudo Kyokai (Japan Kobudo Association) and Nihon Kobudo Shinkokai (Japan Kobudo Promotion Society). Members thus develop a deep understanding of Katori Shinto-ryu through practice and these sorts of traditional ceremonies.

Scrolls and a New Initiative

Katori Shinto-ryu does not use the kyu/dan system adopted by modern martial arts. Instead, three scrolls (mokuroku, menkyo and gokui) are awarded based on a holistic assessment including the individual’s advancement in practice, approach to practice, and character. Scrolls and certificates are not issued by individual teachers, and are awarded directly by our headmaster, acknowledged with his stamp, at keiko hajime.

An “Examination System” was commenced in 2017. There are countless cases of individuals claiming to teach Katori Shinto-ryu, opening dojo, and issuing certificates/scrolls without permission, or teaching techniques that may seem similar to, but are qualitatively different to correctly transmitted Katori Shinto-ryu. The examination system is thus being implemented to clarify technical standards, and ensure transmission of the correct forms of the tradition.